Mate Brendon and I organised a drive for Sunday to take in the best southern roads we know. One thing ledto another and it turned into a group drive. In the end turned out a Skyline R34 GTR, BMW M3, Lambo Gallardo spider, Aston Martin V8 vantage, Porsche 911 turbo and my Audi RS4. Here are some photos.

Everyone Meeting up at a service station in the gong 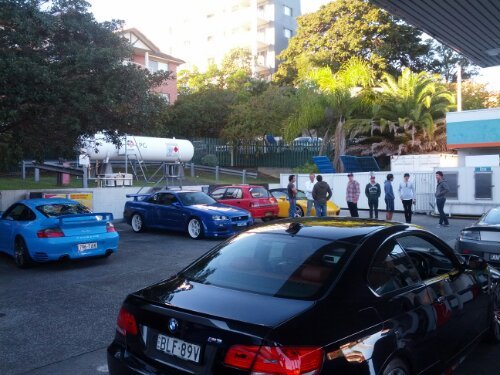 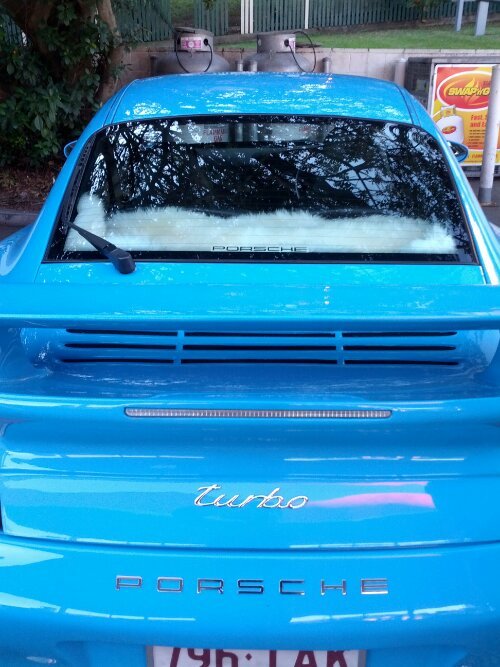 First stop and for breakfast at the Robertson pie shop. This was after the best drive of the day up, Macquarie pass. 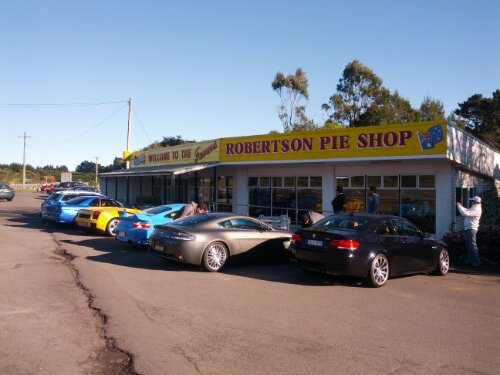 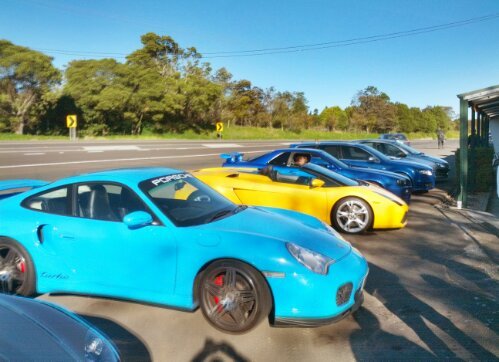 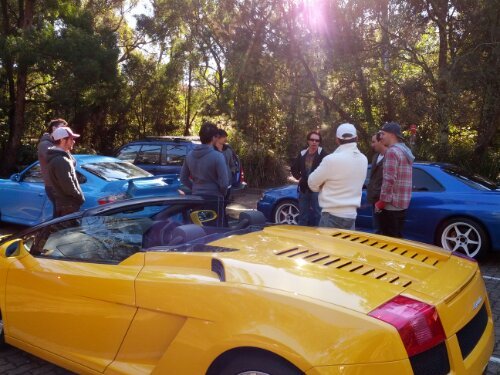 Brendon got a twig stuck in his front right wheel and we had to try and fish it out before it worked it’s own way out.

Next, so a fast drive down to a dam and the excitement of the fish lift at the dam. Ash is interested here

Pretty Aussie country out the back of the dam

Last stop in Berry and time to say good byes, till next time….. 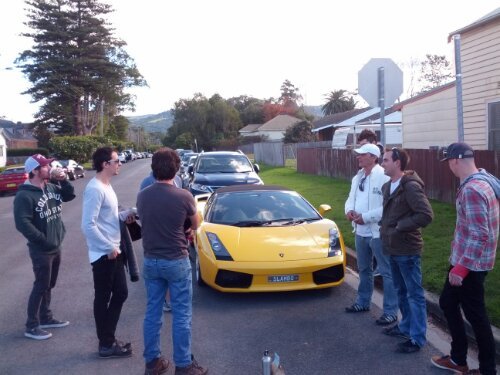 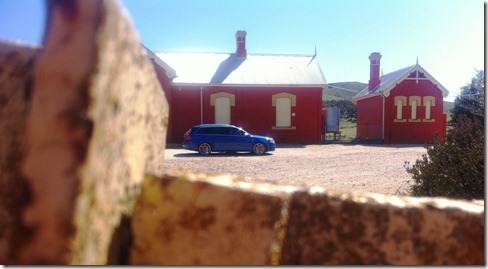 I did something sensible with cars for a change, I actually had a hard think about what I’m going to need to do in the coming years with the business and my cars. I realised that I need a practical car to shift stock and other items around in case of an emergency when suppliers cant deliver and I’m sure all other kinds of reasons.

Its for this reason an estate car or station wagon or ‘wagon’ for short in the Australian dictionary was invented. Now when you think along the lines of wagons (estates) for the petrol head there’s some good Subaru’s, some really good VW’s especially the R36 and then for the real petrol head there’s the BWM M3/M5 touring and in the other stable the Audi RS4 & RS6.

Now the RS6 is as rare as hens teeth and costs around $300,000 on the road for a used one in Australia, so its in the kind of ‘don’t go there’ territory of just the filthy rich. The RS4 though, much more affordable on the used car market at just under half the cost and is still rare enough but it is one if those ‘sleeper’ cars where only people who seem to watch Top Gear know what a monster of a car it is. It also has the added bonus of whenever a BMW M3 owner pulls up next to you, they realise the other person bought the ‘cooler’ car out of the 2.

So, living in the city I don’t have the space for 3 cars and so my lovely Exige S which I only just bought 5 months ago has to go to a new home. I hope to return to a Lotus again one day in the future, they have to be the most fun cars I’ve ever had the pleasure to own. 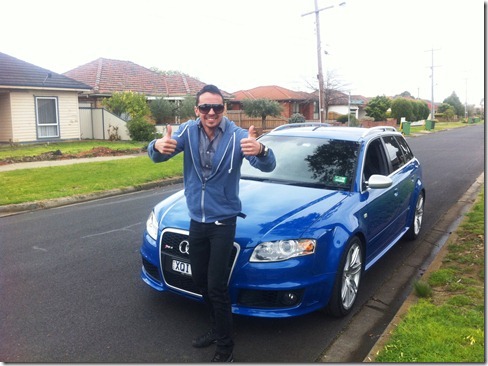 Yay Mark you made the right choice!

Back to the RS4. I found this Sprint Blue RS4 ‘Avant’ as the wagon (estate) is called after having my eye out for one in the classifieds for over a year. One didn’t come up in Sprint Blue for all that time in watching, so as soon as this one came up for sale in Melbourne I jumped on it and had to negotiate between me and another person bidding for it in a day.

The price was agreed and we booked the flight to Melbourne, we, yes Brendon came with me on the trip just like he did with the Exige 6 months earlier.

The thought process of buying the RS4 was very different from buying the Exige. With the Exige I was agonising over trying to find the right spec, year, condition and options and I was never really 100% happy with Black. With the RS4, I knew I wanted a Blue Avant and as soon as I saw one available on the market and knowing how rare they are I just went for it, it somehow felt so right to buy the car, no second thoughts through any of it, it just felt right from beginning to end.

We arrived in Melbourne and did the usual quick test drive and money transfers at the bank and by lunchtime we were North of Melbourne and heading into the beautiful countryside of Northern Victoria. 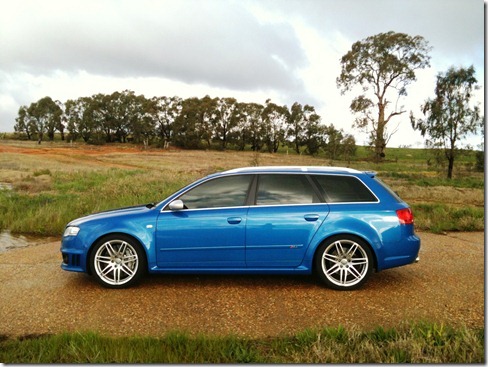 The RS4 looks great from its side profile with its big 19” alloy
wheels all round hiding the massive brakes. 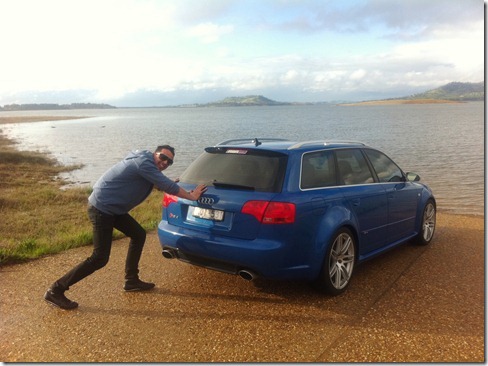 Brendon seeing if the car will float in the lake

We drove though the afternoon through really damp weather but it did prove how well the car can drive quick though slippery road conditions thanks to the clever Audi Quattro 4wd. We made it up through the snaking twisty mountain roads higher and higher until a ‘check engine oil level’ warning message came on the screen, better get oil in the morning!

Just before Thredbo our destination in the snowy mountains, we came across snow on the road and the car started to slide, I panicked and nudged the brakes a bit and the stability control fixed us all up and brought us bad to grip again, excellent.

We stayed the night at the Red Bank lodge again like last time in the Exige. In the morning we had a quick walk on the slopes to remind ourselves what snow is like again as we haven’t seen it in ages it felt. Brendon hadn’t seen snow in 10 years he reckoned, that’s going to seem really strange if your reading this from a cold country somewhere in the world. 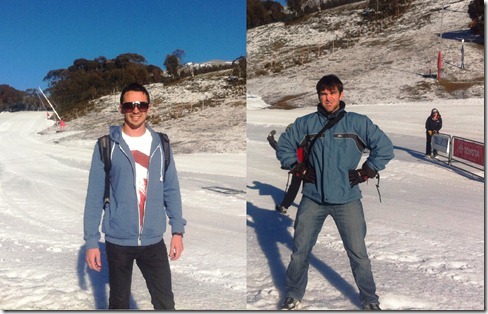 Snow in in an Australian ski resort

In the morning we put in just over a litre of the good Black stuff and the ‘low
engine oil’ warning went away and the car was happy again.

Back on the road we crossed  the border into NSW and the weather started getting warmer as we headed North towards Sydney. We pulled over for a short break and to look at the big wind turbines in the distance, Brendon got a bit excited and started doing star jumps:

Where we pulled over it was a bit muddy and it turned into a test of the 4WD system to see how it copes with muddy terrain. Well it passed with flying colours and gave the car a new paint style too: 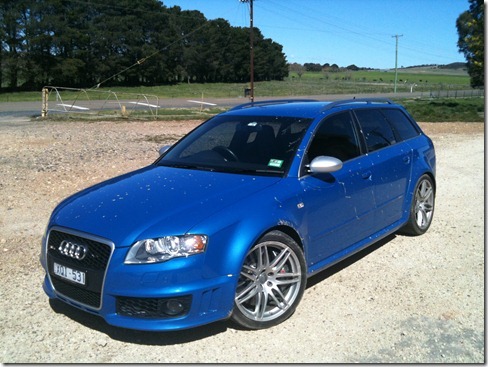 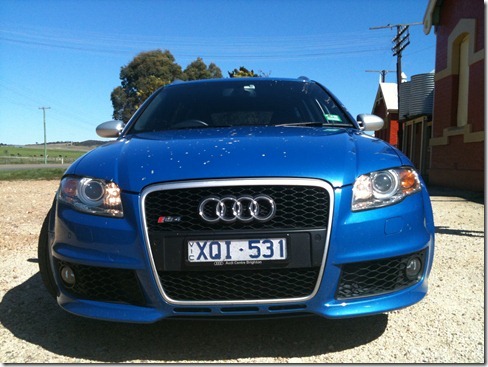 The car looks great from the front,
especially with the new flicked mud paint style 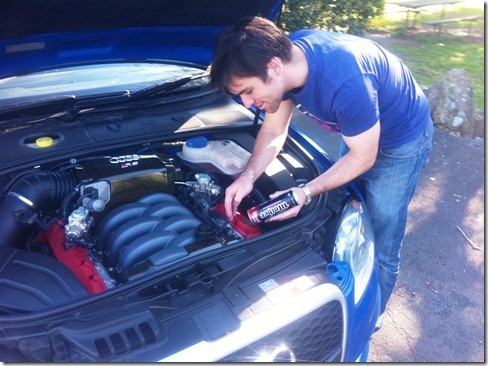 Topping up the Audi with some Mother energy drink, its a secret
but this is where the RS4 gets all its extra power from

Most impressive thing from driving the car some distance are the carbon ceramic brakes followed by ‘that’ engine from the R8. Even from cold the brakes bite so hard, a run down Macquarie pass (a local steep downhill road) proves that when hot they don’t alter their performance, they are much lighter and last 4 times longer than the steel items, amazing technology. 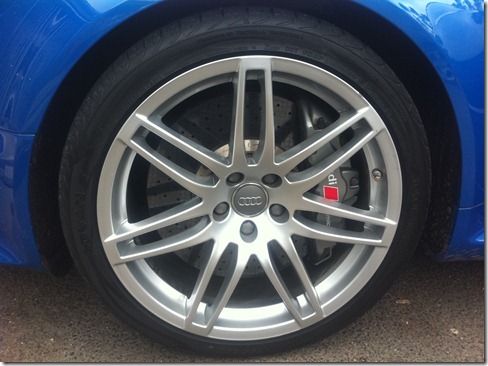 Audi’s carbon ceramic brakes as found as an option on the
RS4, the R8 & the Lamborghini Gallardo & Murcielago

After a long drive of just over 1100km’s we had done the Melbourne to Sydney via the snowy mountains trip again. One thing is for sure, in a Audi with cruise control it goes  a lot quicker than in a Exige S with a engine buzzing away right up behind your head. It was time to give the car a wash after the long 2 day drive and the tuck it up in its new home in Sydney. 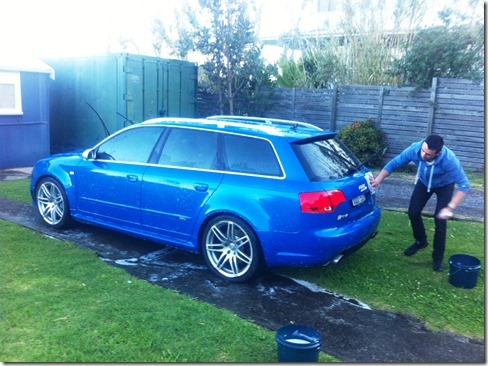 The car has already proved to be more useful than the Exige in a few ways, one example was at one of Sanna’s touch series games, I did a bit of video editing and DVD burning in the boot making my own  little portable video editing suite, very geeky but cool. 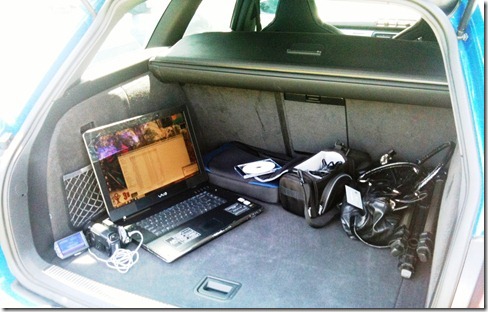 Here is the full video story of the trip on YouTube: 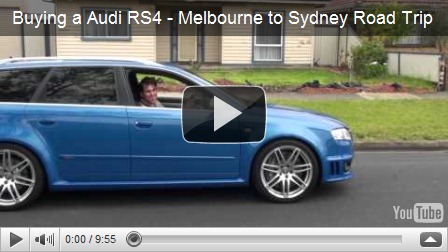