Tonight I was luckily enough to be invited to the launch of the new Lamborghini LP560-4 Australian Launch event at Lamborghini’s Sydney showroom on William St. I was excited to attend as this was the first official motoring industry launch I’ve been invited to and also as it was a special brand unveiling a new car, Lamborghini’s latest model of their baby supercar the Gallardo. 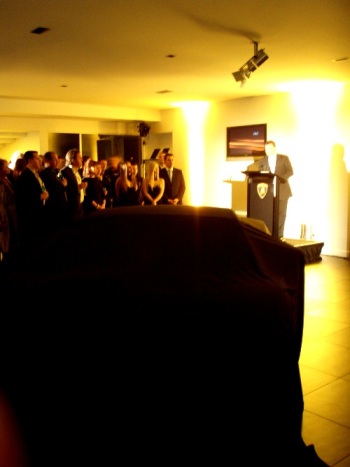 After 45 minutes of drinks and buffet food with a bit of smoozing with various people I seem to keep bumping into at these type of events, we were presented with the unveiling and offical first look of the car in Australia.

As its name implies, this replacement Gallardo is now sporting 560 hp from its new, direct-injected 5.2-liter V10 simular in design to the one from the new Audi RS6 just missing the twin turbos of course. Chopping off 20 kilos from the weight of the car allows the LP560-4 to rocket its 0-100 kph speed down to 3.7 seconds and on to a top speed of 201 mph, while increasing fuel efficiency and reducing CO2 emissions by some 18-percent. 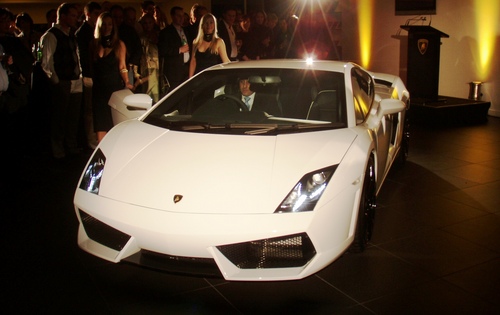 The more angular and larger nose ofthe LP560-4 is revealed

These new weight and performance figures now allows this replacement Gallardo model which slots in as the new base model for Lamborghini, to match the same performance and pace of the previous hardcore Gallardo Superleggera.

Exploring the interior, I notice its design hasn’t been touched at all from the previous model with the cosmetic changes seemingly all focused on the new front Xenon & LED lights combination and the new sleeker cleaner rear end, also sporting LED lights technologies. 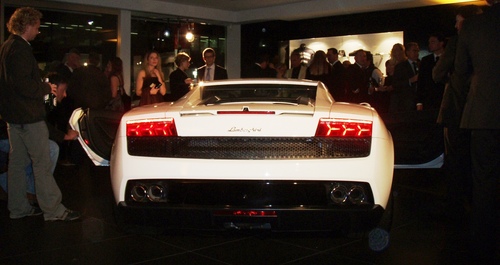 The up-rated and more fuel efficient direct fuel injection V10 seems to be where the design money and main improvement has been spent by Lamborghini for this model. Looking into the engine bay with the glass engine cover raised, I notice there does not seem to be the theatre of exposed engine and exhaust parts like a modern Ferrari engine bay does. For example a Ferrari F430’s engine bay, see the 2 photos I’ve put together below for a comparison, see what I mean?

I spoke to the head of Lamborghini Australia for 5 minutes, as he crouched down I sat in the car and discussed some of its changes over the previous model. He explained the new quicker gear changes are a major change differnce once you get it out on the road, with the shifts now feeling smoother but also quicker at the same time. He was also hoping that this only example of the car in Australia so far would end up as a demo car that will live in the Sydney showroom for the time being. Lets hope I can twist the arm of one of the Sydney Lambo guys for the keys some time soon 🙂

On the search for some good shots of this new baby Lambo I came across this great gallery with some beautiful shots I recommend having a look, Autoblog.com LP560-4 Gallery.