Always the unplanned evenings are the best. We were invited to a friendâ€™s concrete patch by the water where he stores his racing yacht out of water (was made of 100% carbon fibre, was very impressed), a barbie would be there but no view of the bridge was promised.

We turned up and there really was a great view of the bridge in fact. After a few hours of drinking, eating, laughing and dealing with around 20 Irish guys trying to jump the security fence to get in our secure compound area we were in, our evening got even better.

With a big electric crane our hosts lifted 2 yachts into the water at 11:15pm and by 11:55pm we were on the front line drifting right in front of the bridge. We were jumping up and down on the deck like little kids. We were in the best city in the world for NYE and we were so lucky to have the BEST seat in the whole of Sydney.

Considering it was a very unplanned NYE, it was the best NYE we’ve ever had! Now have to deal with the ritual hangover the day after.

Happy New Year to all my friends
and family all over the world! 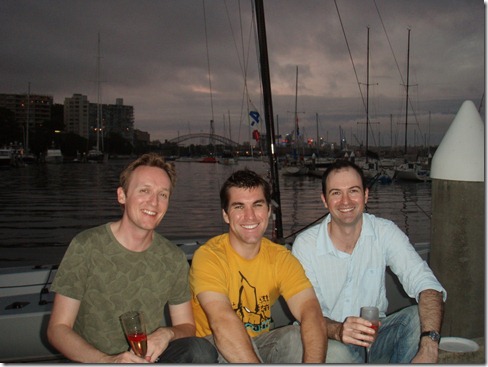 Drinking eating and chatting looking over to the bridge in
the distance, Chris and Christina on the right 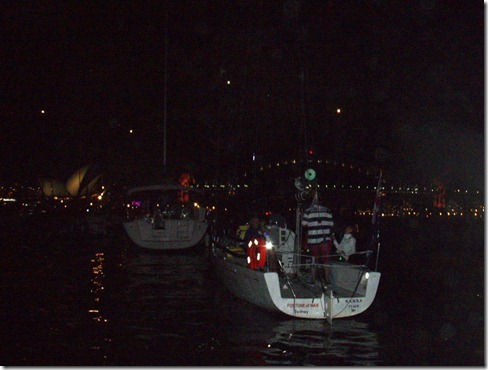 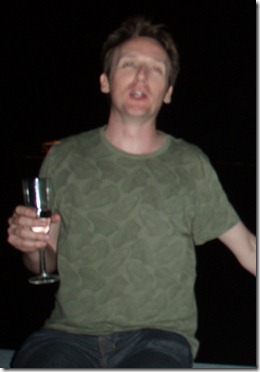 Shawn really drunk too and singing, which is good
as he’s so funny when drunk