Sanna and I successfully completed the 90km Sydney to Wollongong bike ride on Sunday morning! To prove to all you lovely people who sponsored me here are some photos and to tell you how we went. 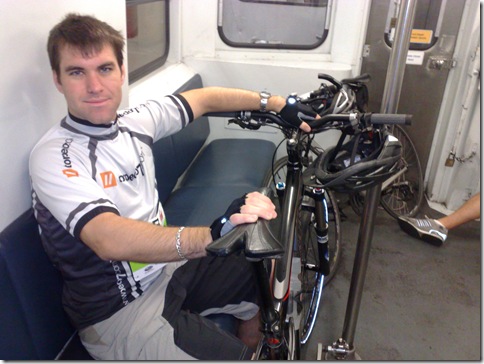 On the train to the start line and still waking up

It was a early start at 6:00am to be up for a Sunday but we had our power breakfast ready that we always have before doing a big sporting event. It consists of 2 slices of wholemeal bread with a banana sliced up and lots of honey.

We got on the train to the start line at St Peters park from central station and we officially crossed the Start line at 7:25am.

The first hour was very congested with other riders, nestling on the road for a space in amongst the 9,998 other riders. While we were in the city also we were all stopped by a lot Red traffic lights. 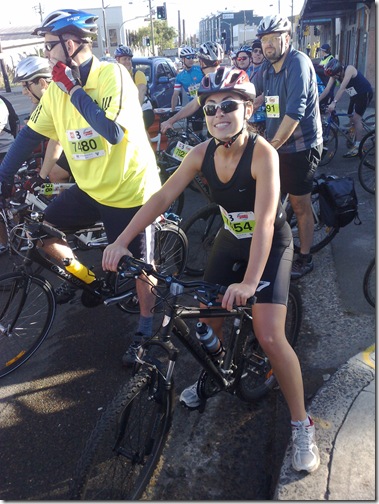 Once we were out of the city though the riders all broke up and distanced themselves a bit and we were free to ride at a good pace we were comfortable at.  Sanna was doing really well and struggled on a few of the steep long hills a little of the royal national park but overall she rode much faster than I thought she would. 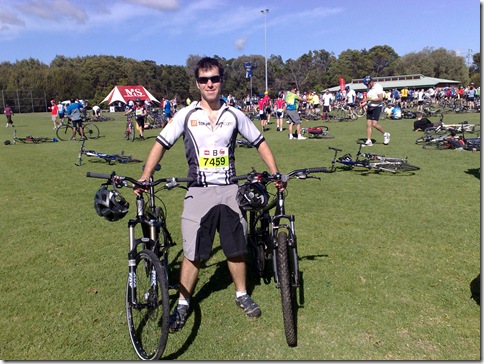 We didn’t stop eating through the ride, in the morning there was morning tea with a muffin with tea or coffee. Then we stopped halfway in the royal national park for a quick sausage sizzle in a roll with barbeque sauce. Then 3/4 of the way we stopped for Gatorade drink and fresh apples, oranges and bananas. 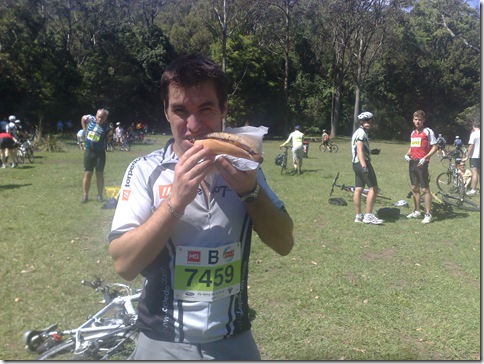 Lunchtime, quick sausage sizzle in a roll with barbeque sauce

There was a guy dressed up as Borat riding along the way which was grossing everyone out. I told him with that green man-kini up his bum if he farted he would whistle, he told me he know and heâ€™s been holding them in all the way. 🙂 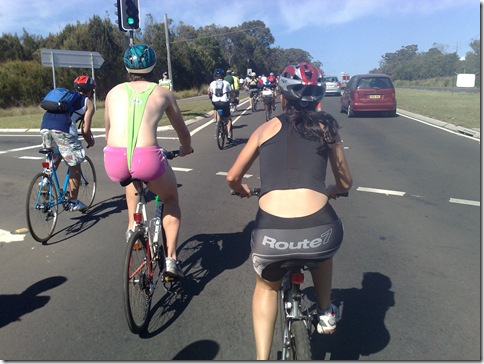 Borat on a bike! thank god he had the pink pants on!

We crossed the line at 1:00pm so we we did it in 5 and a half hours including all the breaks. 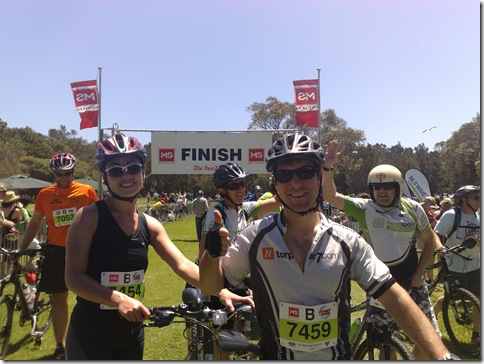 We made it together

Thank you gratefully for the 11 people who sponsored me for the days ride who were:
(in no particular order)

Next year I may attempt the ride again for a 3rd year but next time I may try to aim for a competitive time and ride as quick a time as my legs will take me.

Phew I made it, I hit my $200 target for MS charity just 5 days before the big event!