Well the title says it all really, this was a long time planned trip to the beutuful alpine regeion in the state of Victoria which in the winter time is Victorias main skiing area. The trip was organised a good 3-4 months beofre it happened and was planned ot be one of th elarget trips the Aussie Elises group had ever arranged before. A total of 17 cars, 14 couples some of the best alpine driving roads in Austrlai and a round trip of some 3000km’s so this was a REAL trip and was goinf to be some REAL fun 🙂

A comeritive psoter and car stricker was made up for the trip by group member Zed which he obvuildy spent some time on, it looked great! 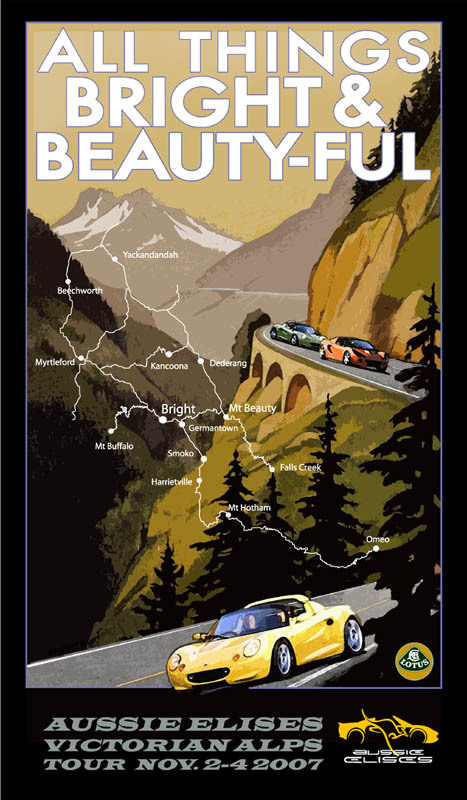 The plan of events was to drive from Sydney early morning to Bright on the Friday, all couples to take part in a treasure hunt on the Saturday and then to take a leasurely drive back home on Sunday at your own speed.

Friday – The drive to the Alps

9 of us had arranged to drive from sydeny togther and we met up at 5am down at the Sydney Opera house, im not used ot being up that early at all so hence I look pretty tired in the photo.

Our 2nd meetup location was a service station up the motorway where a few more members joined us, the weather started to improve so a lot took their roofs off their cars too.

My Elise and my friends Banzi’s Elise parked together, he has made a few extra modifications to his and it looks almost like its a Lotus Exige if you look quickly at it.

The guys still debating roofs on or roofs off

A few hours of drviing in and we reach the Murray river which seperates as the border between New South Wales and Victoria. We in Victoria the state of smoother better looked after roads, which is sports cars drivers love. Here we are following a older Lotus 7/Caterham

Our poor friend Zed had a bit of a crash and we stopped ot come to the rescue. What happened was he stopped to take photos of us all aand hundreds of ants manged to crawl into hs car. He started driving again and they were all over him and he paniced and came off the road going pretty fast! You can see how far he came off the road in this photo!

It was all a bit of teamwork to get his poor Lotus off the rough stuff and back onto the tarmac. His low car struggled to get through the long grass acting as a lawn mower. It took quite a few of us and some smooth throttle control to just about get him out! It was hot and we were sweating and all brething in exhaust fumes but we all laughed. Zed’s poor car under the skin was pretty badly damed though 🙁 All from having ants in his pants 🙂

627 km’s in to the drive to Bright and we were only three quarters of the way.

Sanna did some of the driving too and she stayed up to speed with the guys well. I am very happy with my new union jacks under the indicators which Zed gave to me as a present.

A fellow Aussie Elise’er, Morris as we were having a chat driving side by side through one of the country towns’

We arrived in bright after around a 800 km drive and driving all day. It was arranged that we took over the Bright Brewery for a ‘Beer Apreciation course’. We were so tired form the drive and had a real fun for beer and having a relaly good time. Everyone was so friendly and great fun. The girls had their own seperate area stocked with wine’s to keep them happy.

Saturday was the main day and and a large teasure hunt with clue’s and objects you had to find and people you had to speak to. It was very well organised by my firiend Ashton he has put a lot of homework into making it a great day in a 150km by 150km playing area.

We all stayed in seperate lodges/B&B’s as there wasent anywhere big enough to take 20 lotus’s and their owners. We stayed in the Arcadia motor lodge and here we are warming up the engines before we meet for breakfast.

Breakfast was in a lovely cafe right out the back of the Bright Brewery where we were all until late the night before. Over breakfast the rulkes for the teasure hunt were explained, the clue packs were given out and some hints at the prizes.

This was Sanna’s breakfast, pancakes and icecream and fresh berries, her favourite.

All the cars lined up at breakfast, just before we jumpe din them and the treasure hunt started. All the locals had never seen so many Lotus’s in such a normally quiet village.

We didnt have time to take many photos during the tresure hunt as it was so franic trying to work out the clue’s and driving to where we could find the answers. This photo was taken driving up one of the mountains, Mt Hotham which in the winter is a ski resort. The fog made for some amazing views during the drive on top of the mountains but in the valleys it was beautiful and clear.

We decided after looking at the map to go a back way via a short dirt track to save some time and get ahead of the others. It turned out the drirt track was infact 38km’s long!! and the map we were given wasent to scale! It took us an hour and quarter to do 38km’s and the car was sliding all over the place not being desinged to go on muddy soggy mud.

After the dirt road the car was filthy on the outside, the new union jacks made it throgh alright though 🙂

The dinner after the treasure hunt, everyone had a LOT of fun and it was one of the best things i’ve done. For making the mistake of driving on the dirt road for 38km’s for an hour and a quarter I was voted the w#$ker of the day award and received a wrist support band 🙂

The grand prize for the Teasure hunt with 600 odd points was my friend Peter who we worked closely with throughout the day. Sanna and me came 2nd out of 15 teams, thats not bad!

On sunday we all made our way home in seperate groups, me and Sanna went back with Banzi and Doc who were really good drivers and we had a amzing drive back through the scenic mt kosciusko national park. It was I tink the best drive i’d had in my life it was truely amaing all the way, like a 3 hour long rally stage, jsut amazing roads that felt were buitl for a sports cars.

The final time most of the cars were together before we left to return to Sydney.

The final photo, a brief stop next to this beautiful tree blossoming, the colours looked amazing next to Banzi’s car.