There have been a few emotional speed bumps to my Lotus ownership experience over the past 6 months, here’s how it all came about, so if you’re sitting comfortably I’ll begin.

Back in December 2009 me and friend Ash swapped cars for a short afternoons drive. His was a 2 week old new BMW M3 and mine the recently supercharged and one of the quickest series 2 Elise’s in the country. We took the cars to crystal car wash to get waxed and buffed and enjoyed a quick beer in the pub next door.

What we didn’t know was the lovely Indians at crystal car wash gave a good liberal serving of ‘back to black’ tyre shine to the rear wheels of the Elise. Ash had only jumped in the car for a 2nd time and made 100metres from the car wash before the back of the Elise lost traction, skidded along 3 parked cars on the left side of the road, before doing a 180 and stopping in the lane of oncoming traffic.

It could of been a lot worse but the conditions were good for other drivers to see the wreck. After much damage accessing by the experts, the chassis had a small crack in the front left suspension area and the little Elise which was my pride and joy for 2.5 years was a write-off. 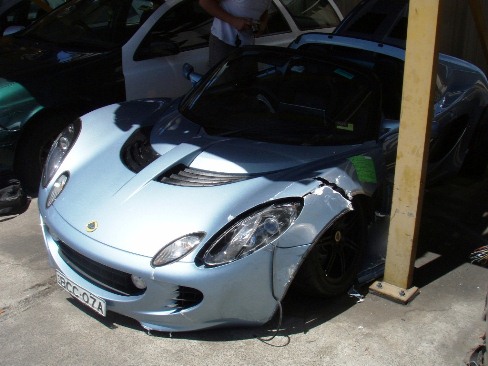 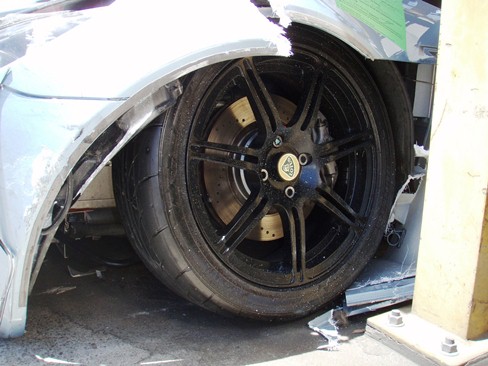 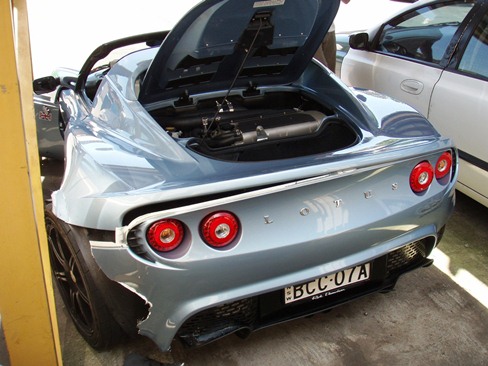 So insurance paid up in full, and I hunted for my next car. I knew it had to be another Lotus, there just hasn’t been another car I’ve driven as rewarding to drive that didn’t have a $200,000+ price tag attached to it.

I didn’t want another Elise, that itch had already been scratched and to be honest I didn’t  want to replace what a perfect owning experience I’d had with a Elise already. So the logical step was an Exige, essentially the slightly harder slightly more track focused version of the Elise.  I knew I also wanted something the same age if not newer than my 2007 Elise.

So the hunt started, phone calls to ad’s and recommendation from friends all came and gone until I found this Black Exige S in Melbourne by a seller named Blair. He wanted close to $90k which was too much but the spec of the car Sports pack & Super sports packs was a perfect match of the rawer edged car I wanted. 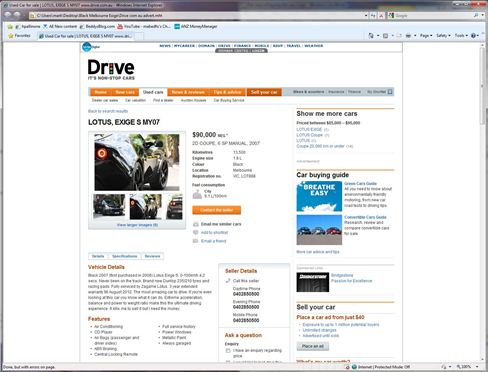 The original advert on Carsales.com.au

I did have a mid bargaining fling with a slightly older and much higher km’s car that I even went to auction and bid for. In chrome orange and at my max limit of $55k it was a bargain, but I stuck to my set limit and I was outbid and so it just wasn’t to be for me.

Back to the Black Exige S in Melbourne and after 4 months we came to a good deal! Over the weekly emails back and forth with Blaire, we built up a bit of a relationship and it was agreed to seal the deal, 2 bottles of Penfolds Grange wine at a cost of $1100 we in order. Fine by me as it was still a deal even with that inclusion and anyhow, how many car sales have been done with bottles of Penfolds Grange exchanging hands, arguably some of THE best wine in the world!

Over email the deal was done, so good friend Brendon agreed to join me for the trip to Melbourne and if I didn’t buy the car after the test drive, he would pay for the flights back for both of us “but that’s not going to happen is it!” he said 🙂

Down to Melbourne on a 6:30am flight (I don’t do early mornings well) and we met Blair in the Airport as he was returning from visiting a mate in NZ. We got to his beautiful house in Richmond and took the car straight out for a test drive in the wet wet rainy cold Melbourne weather. The car was a perfect example Exige S, only 14,000km’s and very tight and solid, it honestly felt like new.

All the paperwork and insurance was done and the Penfolds Grange  was handed over in a ceremony (ok not really) which was accompanied with a Penfolds book I was given when purchasing the wine. 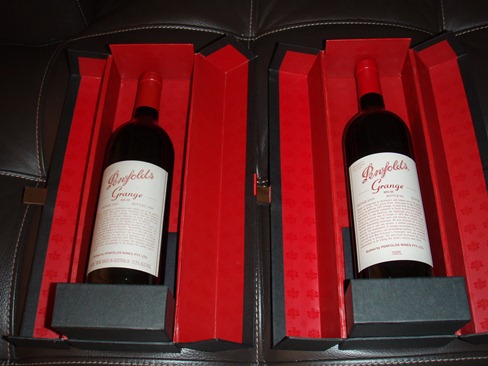 I wrote a short note to Blair in the book:

The title of this book (The Rewards of Patience) couldn’t describe our negotiation for the sale of the Lotus any better! It will be going to a good home and I hope you enjoy your Grange in the many years to come. Keep in touch. 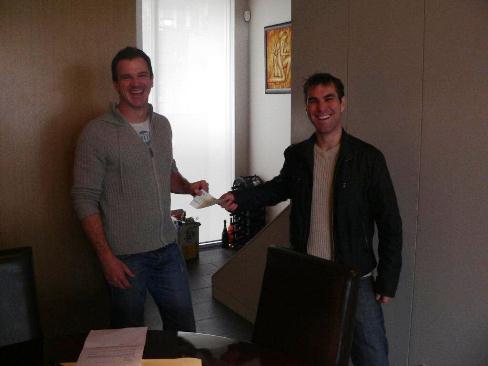 The air was a bit emotional as Blair kind of air kissed the car away as we drove his old baby away.

We had plotted a recommended route via the snowy mountains thanks to Robs son Alex to take in some great driving roads and a night was booked in Thredbo in Robs shared ski lodge there. If you have driven through the snowy mountains before you will know there are a LOT of stones on the alpine roads, so Brendon intelligently brought some Blue tape to protect the nose and sides of the car.

Well that was what we started to do, but we got a little carried away being egged on by the local car wash guys who came to watch and offer advice like ‘you should do that bit’ ‘and that bit’ ‘don’t forget to do the wiper!’. 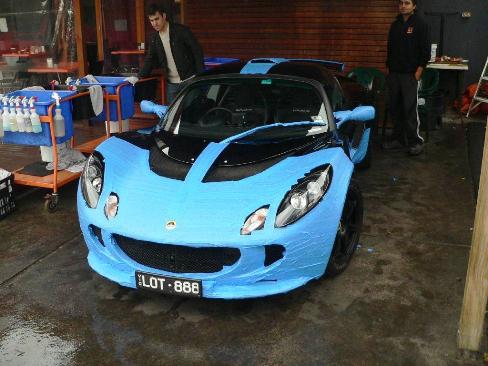 You can never have too much Blue tape on your car! 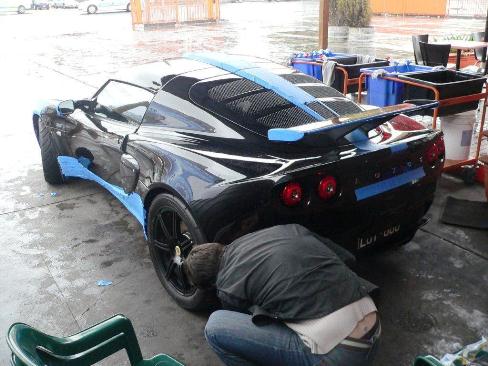 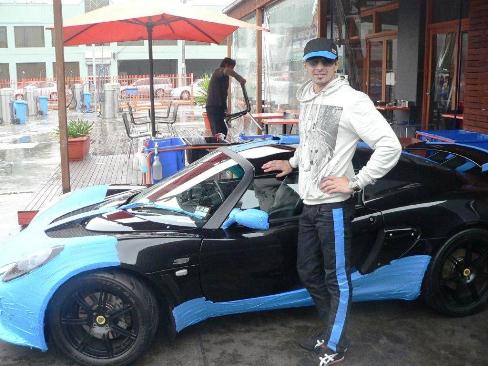 To just Blue strip the car is amateur, you have to blue stripe the drivers too!

Getting closer to the mountains and the NSW border on a long clear motorway and Vic police decided to ping me as I slightly ventured over the 110kph limit whilst checking our location on the map. I was only just over the limit but Brendon straight away said ‘Vic police have zero tolerance, they’ll book you for sure’ and sure enough they did.

Wasn’t a bad experience though, the copper, a older guy, was professional and to the point. We did have a giggle out of it though when he asked ‘what’s with all the Blue tape’ well I said ‘well there’s a lot of stones between here and Sydney’. With that I saw him eyeing up the bits of Blue tape on the roof and said ‘not that bit, that’s just for show’ which resulted in him smiling and a laugh, we left on happy terms. 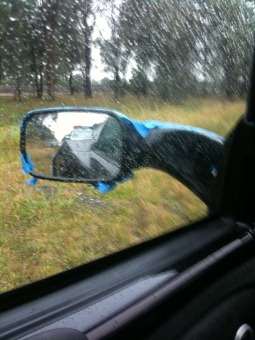 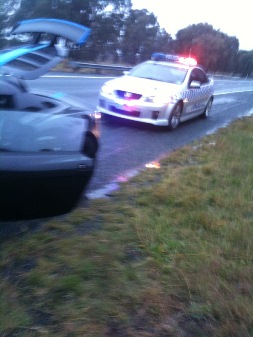 The weather for the whole drive was just ABYSMAL. We left the last town before the snowy mountains ski resort of Thredbo very late with a young girl we bought some supplies from telling us in few words we were CRAZY to drive to Thredbo this late and in this weather. If she knew we were doing it in a Supercharged Exige with semi-slick tyres that run like butter in any standing water, well she would have phoned for the ‘men in White coats’ I’m sure.

We did get to Thredbo safe and sound around 9:30pm, about 4 hours after dark. Highlights of that part of the drive were a short ‘Blare witch project’ style video we made during a stop in the middle of nowhere and when 4 deer were spotted on the verge just as we were on them with me nearly browning my pants.

Thredbo was COLD minus degrees through the night and as it was summer in a ski resort, everything was closed, dinner was 2 packets of crisps, a chocolate bar and a bottle of Shiraz wine to share.

In the morning the car started perfectly from the cold and amazingly all the Blue tape was still there! Still raining hard we took a bit of footage on the video camera and soldiered on towards Sydney.

Driving home the car performed flawlessly and it was nice to have the Lotus traction control there to catch the wheels when you pull away with a couple of cm’s of rain on the road.

After arriving to Brendon’s home just south of Sydney, we pepped ourselves up with a hot coffee at his local favourite coffee shop and pulled off all the Blue tape for the last 80km’s back to mine, our thinking was to allow the rain to blast off some of the tapes glue residue.

Arriving back at mine in central Sydney and the cars trip counter had passed the 1000 km mark and gone back to 45km. What a great drive and eventful trip we had, the conditions were not suited to test the cars driving dynamics out, but we tested it in many other ways in some terrible weather conditions. Thanks Brendon for sharing the experience with me.

Washing the grime off after a long 1045km drive

Next up is to personalise the car a little as my own, no that doesn’t involve me leaving my scent in there! Maybe some stripes, some carbon fibre body panels, maybe a supercharger upgrade could be some of the options on the menu, I’m sure you’ll find out.